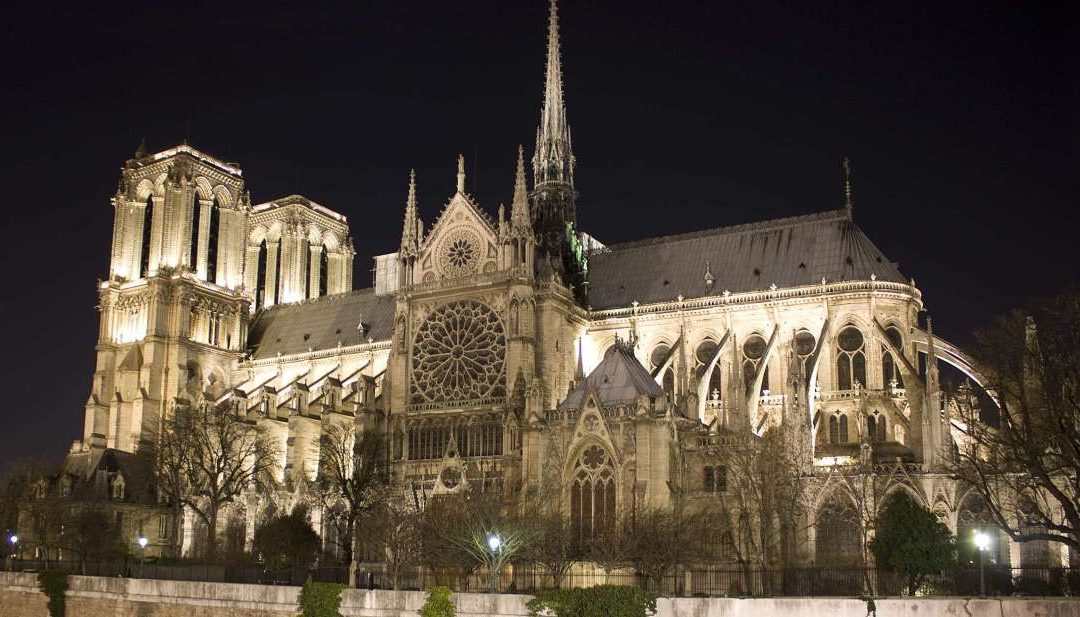 For almost 800 years, Notre-Dame de Paris has stood as one of the most renown and beautiful examples of medieval gothic architecture in the world. From its famous flying buttresses to its imposing west end towers and ascending central spire, this famous cathedral has prominently marked the Parisian landscape since the High Middle Ages, and it now welcomes 11-13 million awestruck visitors a year. It is a truly iconic structure that has served as a symbol of cultural-religious influence and national prestige for centuries. It has played host to papal venerations, royal weddings and kingly coronations involving such notable figures as Joan of Arc, Mary, Queen of Scots, and even Napoleon Bonaparte, who crowned himself emperor of France in the famed cathedral in December 1804.

While these well-known names highlight the history of Notre Dame, it was a fictional character named Quasimodo, the hunchbacked bell ringer created by Victor Hugo, who put the cathedral on center stage just 27 years after Napoleon’s self-coronation. Hugo published his famous novel, The Hunchback of Notre-Dame (Notre-Dame de Paris in French) in 1830 in an effort to raise awareness among his contemporaries of the historical value and beauty of Gothic architecture. In his day, structures like Notre Dame were often neglected and even destroyed to be replaced by new buildings or defaced by replacing parts of old buildings in a contemporary style. Hugo believe that Gothic architecture was not just an ancient style, but rather it reflected the cultural heritage of France so it should be protected. Who would have guessed that Hugo’s purposeful novel would eventually be adapted into an animated Disney film in the 20th century?

As I reflect upon some of the more compelling facts about this famous and truly stunning  European landmark, I am particularly struck by two unique points in its history. First, given our church’s involvement in a building project, I can’t help but be drawn to the middle of the 12th century when construction of the cathedral began. It is quite amazing to consider that the foundation stone of Notre Dame was laid in 1163, over 850 years ago. But that’s not all. The construction of this impressive edifice went on for almost 200 years after that first stone was laid! Over a span of nearly two centuries the cathedral was built in four phases – the first phase alone lasting for almost 20 years. By those standards, our project is WAY ahead of schedule! Of course, I say that a bit “tongue in cheek,” but this part of Notre Dame’s long history serves as a helpful reminder that designing and building something unique and beautiful takes time. And, even though we are not constructing an extravagant, excessively ornate cathedral during the Middle Ages, we are pursuing something that is truly distinctive for our time. In a previous Building Faith article, Steve Kroening put it well when he wrote:

Throughout the Reformation, one thing was becoming clear – the buildings were always a reflection of the type of leadership and the congregation that worshiped in it. In fact, you could tell a lot about the church simply by looking at the architecture… the building that houses the church body communicates to the world what that church is all about… With our Building Faith campaign, we have to ask ourselves what we want our church building to communicate to the world. Are we just another building in the sea of buildings in Atlanta? Or are we distinct?

In an era that prioritizes pragmatism, speed and efficiency, it can be difficult to sustain the steady patience that is required to complete the kind of project we are undertaking. Sometimes, we need only to look back in time to gain the perspective that helps us faithfully move forward.

Speaking of moving forward, if we leap from the 12th to the 21st century, specifically to April 15, 2019, we arrive at the second pivotal moment in Notre Dame’s long, intriguing history that I find inescapably compelling. At approximately 6:30 p.m. Paris time, a fire started in the cathedral and spread quickly, engulfing the heart of this enduring structure in flames.

Within a few hours after the blaze broke out, it had consumed most of the cathedral’s lead and oak roof, a large portion of its wooden rib-vaulted ceiling, some stained-glass windows, and, most dramatically, the building’s 750-ton, 315-feet tall spire. Thousands of Parisians, tourists and visitors to the city looked on while some 500 firefighters fought the enormous inferno. The live video of the fire that was broadcast by news outlets to viewers all around the world left millions watching in stunned disbelief. This magnificent building that had conveyed a sense of stability and permanence for almost a millennia was nearly destroyed in a matter of a few hours. Through the centuries, Notre Dame has fallen into disrepair or been damaged in the midst of revolution and war, but none of those losses compare to the damage caused by this massive fire. It is a sobering thought indeed to realize that something 200 years in the making and approaching 900 years in continuous existence could potentially be turned into a pile of embers and ash in less than 24 hours.

The story of Notre-Dame de Paris is the story of every temporal thing that exists under the unyielding effects of the curse. Yes, Notre Dame has survived all these many centuries, but not without the constant care and restorative efforts of people who determined it should be saved. And even in spite of those valiant, yet limited efforts, its ultimate fragility could be exposed in an instant. In fact, the cathedral was undergoing significant renovations when the fire started, likely a result of an electrical short-circuit tied in some way to the restorative project that was underway. In Psalm 90, the only psalm written by Moses, this reality is depicted in stark terms:

You return man to dust and say, “Return, O children of man!” For a thousand years in your sight are but as yesterday when it is past, or as a watch in the night. You sweep them away as with a flood; they are like a dream, like grass that is renewed in the morning: in the morning it flourishes and is renewed; in the evening it fades and withers. (Psalm 90:3-6)

The sad truth is that we often live our day-to-day lives with an unconscious (or maybe even conscious) assumption that today will be like yesterday, and tomorrow like today, and on and on we go. Then, some jarring event disrupts our “normal” life and we experience a few moments of reflection upon our own fragility and impermanence. Eventually, “normal” life returns and the presumptuous cycle continues until the next reality check confronts us. Of course, we are called by Christ to not be anxious about our lives or about the unknown future, but rather to trust in God’s faithful care and provision (Matthew 6:25-34). I don’t believe the application of that crucial command, however, means we only think about the impermanence of this life when something tragic or otherwise disruptive happens.
So, where is the balance? Thankfully, Moses does not leave us hopelessly burdened with the looming reality of our “dust to dust” existence. No, he bookends his profound and immensely helpful psalm with insightful counsel:

Lord, you have been our dwelling place in all generations. Before the mountains were brought forth, or ever you had formed the earth and the world, from everlasting to everlasting you are God. (Psalm 90:1-2)
So teach us to number our days that we may get a heart of wisdom. Return, O Lord! How long? Have pity on your servants! Satisfy us in the morning with your steadfast love, that we may rejoice and be glad all our days. Make us glad for as many days as you have afflicted us, and for as many years as we have seen evil. Let your work be shown to your servants, and your glorious power to their children. Let the favor of the Lord our God be upon us, and establish the work of our hands upon us; yes, establish the work of our hands! (Psalm 90:12-17)

We are dust, and the things we build will turn into dust, but God is our eternal dwelling place. In Him, we can live in the continuous awareness that our days are numbered and thereby walk in wisdom. In His love we can find true satisfaction and joy, even in times of distress and affliction. And ultimately, whether we are constructing a church building, commuting to work, or counseling a friend, we must depend upon the Lord our God to establish all the work of our hands!